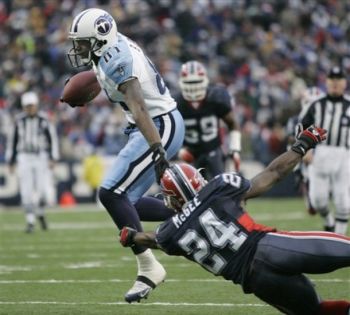 Jones has been the most pleasant surprise of the season so far. He, unlike Gage, has been catching everything that is thrown to him. He had a couple of huge catches on the final drive at Baltimore and made some plays against Green Bay. I never thought I would say this, but he has been the Titans most consistent receiver in 2008. He gets a B.

McCareins is who we thought he was.  He catches some balls and drops some balls.  It would be nice to see him stretch the field a little more, but I doubt he will ever be any more than he is right now.  He gets a C.

Gage might be the biggest disappointment this season.  He was probably the Titans' most consistent receiver last season and was rewarded for that with a pretty good contract.  This season he doesn't seem to be able to catch....wait for it....a cold.  No one expects Gage to be a big play guy, but the Titans need him to catch the ball when it is thrown to him.  He hasn't done that this year, and for that he gets an F.

Hawkins is the wild card in this whole thing.  He has shown that he will catch the ball, and that he has great field awareness with a nice toe dragging catch against the Colts.  The problem with The Hawk so far this season is that he is having trouble learning the offense.  Dinger is not going to give him consistent playing time until he knows he can trust him to be in the right place every time.  The potential is obviously there, but he has yet to contribute as much on the field as we had all hoped for.  He gets a C+.

Chris Davis and Paul Williams are both on the roster, but they are both non-factors (To be completely fair: Davis did have a big 21-yard catch against Houston and a catch in Blatimore).

Scaife is quietly putting together another very solid season.  All of the fuss before the season was about Alge Crumpler, who we will get into in a minute, but Scaife has been the favorite target again.  He has good hands and is great at picking up yards after the catch.  He made one of my favorite plays of the season in the opener against Jacksonville when he took a screen pass 44 yards.  He gets an A.

Crumpler has been a big disappointment.  I was really excited when they signed him in the offseason, but he has looked lost for most of the season with the exception of the TD catch to beat the Ravens.  I think he will play a role in the second half, but he has to get an F at this point.

Craig Stevens has yet to catch a pass.  He had one chace and stepped out of the back of the end zone for no reason.  I guess one shot isn't enough to grade him on though.