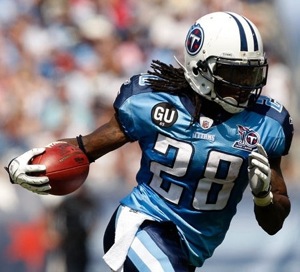 This may be the easiest position grouping to grade on this team, and they're almost certainly the most fun to watch on Sundays. Chris 'Crazy Legs' Johnson was drafted to give our stagnant offense some life. National pundits mocked the pick, and local nutbar-fans like myself wondered why we would spend another high pick on a running back.

Now we know why.

Rather than use him as a change-of-pace back and 3rd down specialist, Crazy Legs was thrust into the limelight and quickly began eating away LenDale's carries. Johnson's success has come quickly, and his momentum changing plays have helped wake-up an offense that still seems too content to punt sometimes. Here at the halfway point in the season he's leading the AFC in rushing. He isn't afraid to take a hit, can run inside and outside, falls forward for extra yards and has yet to lose a fumble this year. Crazy Legs has also chipped in 164 receiving yards.

While LenDale may be carrying the ball less, he's gotten a whole lot more opportunities to audition for celebrity dance shows from end zones across the country. Until the past few games Lendale's yards per carry was hovering below 3, but a few big runs against the Chiefs and Packers have helped raise that average back above 4. A shoulder injury slowed down his wrecking ball ways for a few weeks, but LenDale has been one of the most consistent short-yardage backs in the NFL, and he's still broken of an 80 yard run.

Quinton Gainther, Chris Henry and the newly available Rafael Little have had next to no contribution so far this year, but that's more a testament to the health and effectiveness of Smash and Dash than a knock on their abilities.

So in summation, we have the AFC's leading rusher setting-up the NFL's leading TD machine. It just doesn't get much better than that folks.