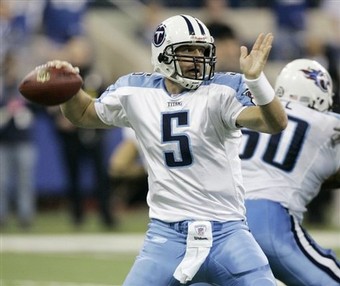 This is going to be a bit redundant after the fantastic job that Beans did breaking down Kerry Collins's performance earlier this week, but I figured I would go ahead and throw my 2 cents in. Collins has done exactly what this team has needed him to do so far this season. He has thrown just 3 picks in his 7 games started and has only fumbled twice. For that he gets an A.

The other very impressive part of Collins's performance is that he has only been sacked 3 times in 8 games. Now a lot of that credit goes to the offensive line, but Collins gets some of the credit for the clock he has in his head for getting rid of the ball and for the 15 pounds he lost in the offseason to help with his mobility. This offense is only going to be productive when it is manageable down and distance situations. He, along with the offensive line, get an A on this front as well.

Now we get to the part of his performance that hasn't been so good. The biggest reason people say Vince Young will never be a good QB in this league is because he isn't accurate. Vince completed 62% of his passes last season. Collins is only completing 57% of his passes this season. Collins is obviously making better decisions than Vince did (Vince threw 8 picks in his first 7 starts last season), but he is going to need to be more accurate for the Titans to keep winning games. Collins gets a D- for accuracy.

Collins appears to really have this team behind him. A quarterback controversy is the quickest way to divide a lockerroom, and Collins has done and said all of the right things to keep that from happening. In this offense leadership is the 2nd most important thing for the quarterback to have behind ball security. Collins has proven to me that he has the mentality to take this team all the way. He gets an A for leadership.

So far this season Collins has done the job that he has been called to do, nothing more and nothing less. I would give him an A if his completion percentage were highter, but with those numbers it is impossible for me to give him anything higher than a B, just as Beans did.

I will stop this position evaluation there because there is really no reason to rehash any of the VY stuff at this point. Vince will get his shot again at some point, and we will evaluate him at that point. For now all we can do is hope that he is taking this time to soak up all of the knowledge he needs to be an NFL quarterback.

Obviously there is not any available info to use to evaluate Chris Simms, but we do know that he no longer has a spleen. That has to count for something.