Share All sharing options for: Titans 19 Packers 16: Redemption Thy Name is Bironas 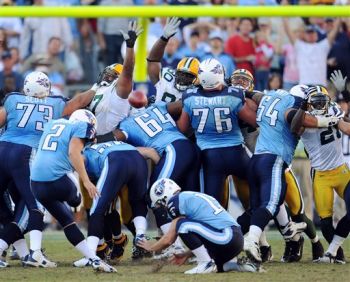 August called it Vintage Fisherball this morning.  I couldn't have said it better myself.  We have gotten spoiled this season with the Titans blowing out most of their opponents, and I had forgotten just how stressful that type of game can be.

Did anyone think there was anyway Rob Bironas was going to miss that second kick?  I know I didn't, and neither did Craig Hentrich:

"The good thing about Rob is that his ADD is so bad he doesn't remember the last kick," joked Titans punter Craig Hentrich, who doubles as the holder on placekicks. "He's got a great temperament for a kicker. He never lets things bother him."

Someone asked yesterday in the open game thread, which was awesome again by the way, if that was the first money kick that Bironas had missed for the Titans.  Off the top of my head the only miss I can remember that would have won a game was in 2006 against Baltimore, but in fairness to Bironas, that kick was basically blocked in the backfield.  It cannot be overstated how important it is to have a kicker as money as Bironas for Fisher's style of football.  We will probably see a lot more of these games come down to a field goal in the coming weeks.

I am still a little blown away that Kerry Collins threw the ball 37 times yesterday.  The Packers have one of the best defensive backfields in the NFL.  Combine that with the worst receiving core in the NFL, and it provides a 18 of 37 for 180 yard effort.  Collins played poorly yesterday.  There is no way around that.  Sure the Packers secondary is good, but he was off the mark consistently and had a couple of passes that really should have been picked off.  There was a lot of talk about putting in Vince Young in the game thread.  I joked about it, but it would have absolutely been the wrong move.  You have told Collins that this is his team, and you don't pull him for one bad effort.  That being said, he is going to have to be better than that for the Titans to continue to win games.

Chris Johnson contiues to be one of the most exciting players in the NFL.  It is just fun to watch him with the ball in his hands.  He didn't have his most successful game on the ground yesterday, 24 carries for 89 yards, but he had his best day as a receiver with 6 catches for 72 yards.  What a great pick by the front office.

It is time for some changes to be made a wide receiver.  Justin Gage just isn't getting it done and Brandon Jones is.  The starting receivers for now should be Justin McCareins and Jones.  Lavelle Hawkins will eventually replace McCareins, but for now all reports are still that The Hawk hasn't completely grasped the offense.  Dinger will not give him any more PT than he is getting now until he is confident that Hawk will be in the right place 100% of the time.

The defense gave some stuff up yesterday, but they were able to hold the Packers offense, which is hands down the best offense they have faced all season, to just one touchdown.  Aaron Rodgers is going to be a star.  He is the perfect quarterback for that west coast system because is mobile enough to buy himself time and very accurate.  Rodgers to Greg Jennings is going to be a deadly combination for the next few years assuming the Packers lock Jennings up.

Cortland Finnegan spent a lot of time matched up on Jennings and did a good job for the most part.  He wasn't able to bring him down on the 52 yard reception but made an outstanding play on a deep ball later in the game when he was in single coverage.  Jennings wanted a pass interference call, but it looked like really good coverage to me.  It was nothing like the mugging of Bo Scaife in the end zone where there was no flag.

It was nice to see Jacob Ford step up yesterday.  The injury to Kyle Vanden Bosch is obviously a lot more serious than the Titans have let on so the back-ups are going to have to step up.  Ford did that yesterday with 2 sacks and a forced fumble.  Keep in mind that he is basically a rookie after missing the entire 2007 season with an injury.  Watch for him to continue to get better as this season goes on.