Share All sharing options for: Titans 47 Lions 10: The Recap 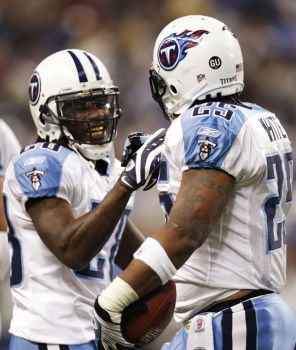 Well this game was pretty much over on the second play of the game when the Titans defense recovered a fumble.  Two plays later, a Brandon Jones 28 yard run and a Chris Johnson 6 yard TD run, it was 7-0 Titans, and they would never look back.  This was a game the Titans very much needed after getting beat by the Jets last week and after a few weeks of getting away from what the Titans do best.

The Titans defense did allow the Lions some hope on the next drive when they allowed them to get a field goal, but 4 plays later Crazy Legs took the ball 58 yards untouched for another touchdown.

The funniest play of the day was the screen pass that Dave Ball intercepted and ran back for a touchdown.  He did some type of flying turkey as he crossed the goal line.  I love to see him make plays because you never know what he type of celebration he will end up doing.

As predicted by me, LenDale White got his share of carries in the game yesterday.  Smash ended the game with 23 carries for 106 yards and 2 touchdowns.  Those 2 TDs gave him 13 for the season and moved him into a tie for the league lead with Michael Turner.  He even got to take a handoff from Vince Young.  VY had the best day of his career with a QB rating of 118.8.  Quarterback controversy?

A few other notes:

Again, I realize this was against the Lions, but it was a good opportunity for the Titans to get back to what they do best.  They face 2 more weak rushing defenses in the next 2 weeks, so expect more of the same in those games.  That should give them the momentum and confidence needed to finish out against two tough teams.