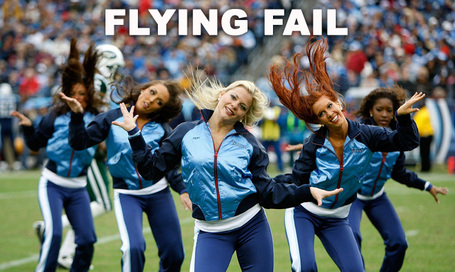 Other than seeing the Titans get back in the saddle after Sunday's loss, I'm excited about because Thursday's game will give us a long look at the WR I'd hope we break the bank for when he gets sick of the Ford family: Calvin Johnson.

Teresa Walker knows what's up:  we need to get back to pounding the ball, and making them pay with the play action pass when they get 9 guys in the box.

Nick Harper and Jason Jones returned to full practice yesterday!!! Harper's value is obvious, but Jones has been pretty productive as one of the first D-lineman to come off the bench.  He could be a beast due to match-ups over the next few games if he's really healthy

If the Titans win and Indy losses this week, we'll clinch a playoff spot.

A Nashville sized hat tip to LenDale for being a man and apologizing for those stupid comments after the game Sunday.  It was also good to hear from several people who were at the game that Vince was the first one there to cool LenDale off on the sideline as the big man bickered with RB coach Ernest Byner over playing time.

Paul Kuharsky updates us on the Pro Bowl voting (vote or die, as Puffy once said); if you'd have told me in June that Crazy Legs would be getting more votes than LaDainian Tomlinson at this point, I would have said 'That's awesome, future man!' and posted it in the links.

Peter King doesn't like a few ticky-tack things about the Pro Bowl voting, while I'm more than a little hacked about a few trends with it as well: Like how Bret Favre is leading the QB spot in the AFC?  I thought only lineman got in on reputation even if others *cough*Philip Rivers*cough* are playing light years ahead of them.

We've slipped to a season-low 4th place in the Football Outsiders' DVOA stat for defensive efficiency.

Jim Wyatt delivers 5 things we should know about the Titans - Lions match-up, including these ugly numbers for the opposition: