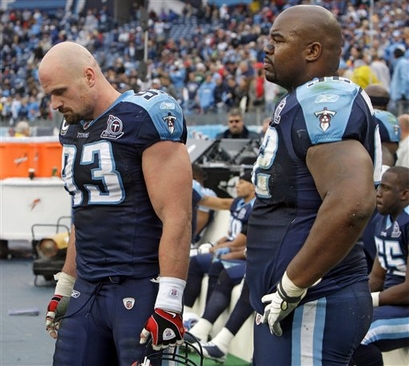 More details have come out on the LenDale White situation on Monday, and it sounds like whatever beef the big man had has been effectively squashed.

The Titans had to submit a projected injury list yesterday due to the short week, and there are some key names on it that we're going to need down the stretch.  So, the question is, so we sit them against a hapless 0-11 Lions squad?

Easily the worst researched, most poorly thought-out piece of newspaper opinion I've seen in years, and it's from someone who certainly didn't watch Sunday's game.  Last time I checked Kerry Collins wasn't dropping easy passes on 3rd down or playing line backer as guys ran past him.

The Yahoo! Team Report for this week reveals the that newest Titan, CB Tyrone Poole, will gladly tell you all about his fountain of youth.

Mike Freeman wrote an article on Vince Young that is largely stock, but contains one rather disturbing paragraph:

Then there was the craziness of Fisher calling the Nashville police after a therapist informed Fisher that Young had thoughts of suicide (Young has denied this). The police have since made an addendum to their original filings, the New York Times reported, and it's somewhat worrisome. "I asked him, ‘What made her worry about him?' " Lt. Andrea Swisher wrote, speaking about the therapist. "He stated, 'His mood, his emotions, he wants to quit, and he mentioned suicide several times.' He went on to state that he left the house with a gun."

Interesting note: This was just the third game in NFL history featuring two starting QBs with a combined 100,000 career passing yards. One of them, Favre, broke yet another record as he became the first QB to win in 32 different stadiums, passing Dan Marino.

Afraid that a dedicated TV network, games broadcast by the largest sports-broadcast machine in the world, year-round coverage by every reputable media outlet and an army of bloggers/fantasy football addicts aren't enough, the NFL will go 3-D soon.