Tennessee Titans Morning Links: I Bet The Chopper Had Plenty Of Gas Too Edition

Share All sharing options for: Tennessee Titans Morning Links: I Bet The Chopper Had Plenty Of Gas Too Edition 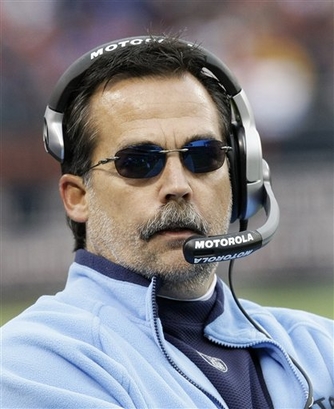 Jeff Fisher arrived at Titans practice yesterday via parachute after jumping from a perfectly good helicopter with soldiers from the 101st Airborne!  Hopefully that'll be the extent of our free-fall this season.

Terry McCormick delivers the first real news on why the heck Nick Harper has been hurt: Harper broke his ankle last year and didn't know it until he had off-season surgery!  When the crack healed calcium deposits formed and those have been giving Harper significant trouble.  He's the football equivalent of 'day-to-day'.

How I've done these links for so long without a single Kige Ramsey link I have no idea, and to those who aren't aware of this cat I apologize.  He may be the web's most visible Titans fan, and an example of everything that's so right with new media.

Jeremy Green makes-up for his disaturous analysis of the Titans' 2008 draft by penning this article about something I've been contending all year: the Titans have the best O-Line in the NFL.

ESPN The Magazine has an excellent story written by NFL players on their personal security away from the field, and the fist installment is written (quite well, might I add) by the Titans' own Kevin Mawae.

Brandon Jones got a $15,000 fine for his Pacman impression during last weeks game, and now he's going to appeal it.

Crazy Legs and Houston's Steve Slaton have both excelled in one area that usually stifles rookie RBs: pass protection.

PFW profiles Chris Carr and his impact on the Titans' season.

Former Panther Kris Jenkins has revitalized his career with the Jets this year, and the match-up between he and Mawae will be a great one to watch.  Hopefully though, that match-up will be over shadowed by the blur of blue and dreads that streaks past both of them.

That Bendability index we've been keeping an eye on?  Still crushin' it.

How good is our pass defense efficiency according to Football Outsiders?  We're leading the league at -33.4%.  2nd place are the Packers at -30.7%, but third place are the Steelers all the way down at 24.5%!

Don Banks did a ton of research on the history of ties in the NFL and came up with some gems, including this one from the Oilers of yore.