Today felt like last year.  We won ugly, but we won.  Kerry Collins had a wild day, completing less than half of his passes and nearly getting intercepted twice.

Now, it is true that the Packers have an excellent secondary, and they pressured our line more succesfully than all of our previous opponents, but on some of the errant throws Kerry was just stinking it up. 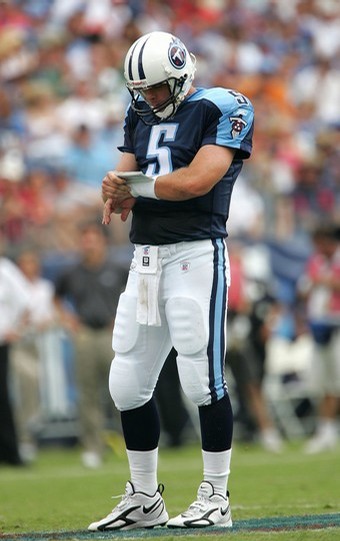 This is the most pleasant surprise of all, the biggest worry for Titans fans was that Collins would be a statue standing there behind the O-line.  But Collins, while obviously not the running threat that Young is, has moved the ball succcesfully with his feet when necessary, and has displayed the quickness necessary to avoid sacks.

Collins is 117 for 207, for a paltry pass completion percentage of 56.5.  He's never been a very accurate quarterback throughout his career, but this number needs to be higher, especially considering weather conditions are about to deteriorate and the ball will become harder to throw.

Collins has thrown only 3 touchdown passes, but at the same time only 3 interceptions.  Kerry rarely tosses up the garbage pass freebie to the opponents in an area where no Titans are to be found.  He also has the presence of mind to tuck the ball and run with it if he doesn't see an open receiver.  His maturity and experience are are a definite asset.

Leadership and killer instinct - B

Collins seems to have won the locker room.  He is calm under pressure, and he has rallied the team to victory (through the air, no less) against the Colts and the Ravens.  He has the confidence you need to win in the NFL.

When you look back at teams that were built like the Titans, the Bucs of 2002 and the Ravens of 2000 come to mind.  Teams who were strong on D, liked to run the ball, control the clock, but almost never asked their quarterback to win the game for them.  I wouldn't want to be down by a couple of scores with Collins and our crew of receivers.  Though Collins has been able to mount a comeback drive to win a game, the criticism is legitimate.  To be a team that can mount an explosive comeback you need the ability to strike quickly.  Unfortunately, even though I cite Brad Johnson as an example of a team with a less-than-stellar QB that won the Superbowl, Johnson had considerably better stats than Kerry does this year.  Even Trent Dilfer's stats from 2000 were a bit better than Kerry Collins' are this year.  I just can't justify a score higher than a C here.

How do you grade Kerry Collins Performance so far this year?