Tennessee Titans Morning Links: Raise A Hand If Your Team Is More Likable Than The Pats Edition

Share All sharing options for: Tennessee Titans Morning Links: Raise A Hand If Your Team Is More Likable Than The Pats Edition 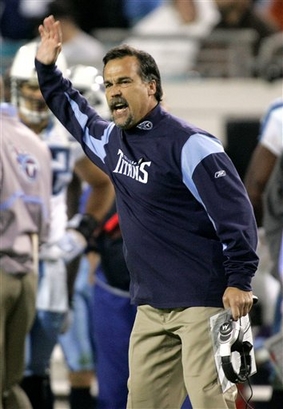 Wow.  Last year I thought Mercury Morris was being a real jerk about the Pats because he didn't want anyone else to be perfect.  Turns out, he just didn't like the Pats being anointed in week 5. As such, he likes our Titans because they're earning it every week, and they're playing old fashioned football.

Music City Miracles now has some stiff competition in the blog game, and it's from studly middle linebacker Stephen Tulloch!  Make sure you check out the man's blog, because it really is a good look into the life of a burgeoning Pro Bowler.

Congratulations to David Thornton for winning this year's Walter Payton NFL Man of the Year Award for the Titans.  The son of a preacher, Thronton's community service and charity work also brought him the honor with the Colts in 2003.

On the injury front, Eric King may be back before the end of the year after re-fracturing the same arm that landed him on the IR last year, while Boom King, Harper, McCareins, and Jason Jones will all have a shot at playing Sunday against the Jets.

Next time someone cracks on the Titans' offense, you tell them this:

Among AFC teams, only the Jets, Chargers (254) and Broncos (248) have scored more points than the Titans, who have rolled up 244 points.

And I will remind you that our defense is still only giving up a stifling 13.1 points per game.

This week's Yahoo! Team Report touches on the defensive reserves who have come from no where to cover for what could have been costly injuries.

DJ Gallo jokingly summed up everything I assume media folks are saying a little louder every week that we keep winning:

The Tennessee Titans are now 10-0. They are clearly a legitimate Super Bowl contender, yet they hail from a non-major media market. How annoying. How rude.

PK) Tennessee has to sign Kerry Collins to a fair-market deal, even if it means Vince Young has to sit behind him for two more years … or if it means the Titans lose Bud Adams’ favorite boy toy.

KSK) Never thought Bud Adams and Kevin Spacey had so much in common, did you?

A former 2nd round pick of the Titans in 2004, Ben Troupe just got cut by the Oakland Raiders after agreeing to an injury settlement.  That's not exactly a career builder.

Our condolences go out to the family, friends and fans of former Oiler defensive tackle Orville Trask, who passed away last week at age 73.  Trask was an Original Oiler, the franchise's first captain and a corner stone of 2 AFL championship teams while rocking the blue and white.