Chronicles Of Overreaction: The Camera Doesn't Lie, But It Doesn't Pass Lazy Speculation As News Either

Share All sharing options for: Chronicles Of Overreaction: The Camera Doesn't Lie, But It Doesn't Pass Lazy Speculation As News Either 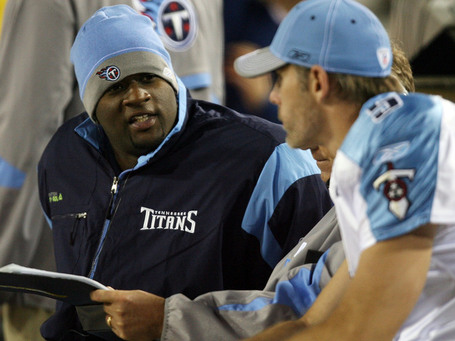 What is Kerry Collins' problem here?  I mean VY is right there in the mix, checking out Polaroids from the last drive, discussing strategy with coaches and Kerry. What more could you want?  He's doing everything a back-up QB is asked to do in Dinger's system.

But what does Kerry do when VY politely asks for his input?  He just stares off into space like VY didn't even say anything... probably looking at a cheerleader too.

What a teammate.  Way to treat your colleagues with respect, KC.

It's clear that Kerry doesn't have the right attitude on the sidelines, and this team won't be able to keep winning with his selfish, elitist behavior towards his teammates.

- Signed David Climer, Mike Florio (who doesn't get the satisfaction of a link), Stephanie Stradley (who I still like as a writer), BBS and all of the other over-reactionaries who have spent time mouth-breathing down VY's neck rather than studying how this team is steamrolling the entire NFL.