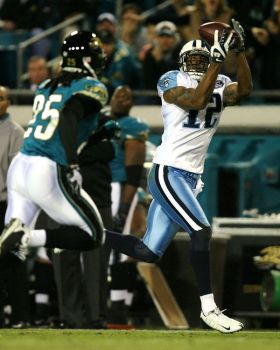 This could also be titled the Radio Shack edition of the recap.  You've Got Questions, We've Got Answers.  The Titans continue to prove that they can win games in all types of ways.  They outscored the Colts, overcame a terrible performance by Kerry Collins to beat the Packers, threw their way to a victory in Chicago, and came roaring back from a terrible first half performance to put up a 21-0 second half score on the way to a win against the Jags.

That first half was the worst half of football this team has played this season, and it isn't even close.  The offense could do nothing.  If you take out the field goal drive that was 8 plays and the knee at the end of the half, the Titans offense ran 16 plays on 5 drives.  The only drive that wasn't 3 and out was the first of the game when Collins hit Gage for the 47 yard gain on the first play of the game.  It's no wonder the defense looked gassed at the end of the half.  They were on the field for all of it.

Luckily they play a second half in the NFL.  Jeff Fisher should get coach of the year just because of the second half adjustments his squads have made all season long.  While a lot of people in the game thread already had the Titans down 21-3 because the Jags got the ball first in the second half, the defense wasn't ready to concede that.  There was a pass interference call on Chris Carr on the second play of the half that gave the Jags a first down, but that was all they would get on that drive.  There was even a Jevon Kearse sighting with a HUGE sack on second down.

The Titans got the ball back and took the momentum back as well.  Collins was very sharp on the ensuing drive going 4 of 4 for 37 yards that included a 13 yard touchdown pass to Brandon Jones.  As August mentioned this morning, that celebration was just silly.  Those 15 yards you get for excessive celebration are very important yards.  If you are going to get them please earn them.

After the defense forced another 3 and out, the Titans did a 3 and off the field when Collins found Gage for a 56 yard touchdown.  12 Gage used a nice stiff arm to carry Reggie Nelson for about the last 15 yards of that.  Nelson should have been penalized for tossing Gage to the ground when he was clearly in the end zone.

The funniest moment of the game came on the kickoff that followed that touchdown when Jags' return man Brian Witherspoon decided to kick the ball out of bounds at the 3 yard line.  Jacksonville would get some yards on that drive but would end up punting.  The Titans offense reverted back to first half form on the next 4 drives with 4 punts and not very many yards.

I was starting to get a little nervous with the Titans clinging to 17-14 lead late in the 4th quarter until Chris Carr picked off a David Garrard pass with 5:49 left to go, and Collins found Gage again, this time from 38 yards out, to put the game on ice.  After the defense stopped the Jaguars again, LenDale White came in and busted some heads to make sure the Jags didn't get another shot.

This was another big win for this team.  It keeps the 4 game AFC South lead and the 3 game lead over the rest of the AFC with just 6 games left to play.  It also proves that they can put up points in a hurry when they need too.

A few other thoughts: