Tennessee Titans Morning Links: We Need A Bigger Hitch For The Truck Pulling This Bandwagon Edition

Share All sharing options for: Tennessee Titans Morning Links: We Need A Bigger Hitch For The Truck Pulling This Bandwagon Edition 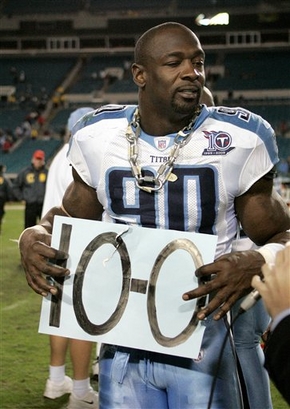 Would everyone else here please join me in welcoming Justin Gage to the season.

Chris Carr got his shot as a DB, and boy did he ever seize the opportunity.  Between Carr and the outstanding play of our reserve defensive lineman like Ball and Vickerson, how could any team claim more depth or talent on defense?  Now we just need to get guys like Boom King and Jason Jones healthy again...

With Kerry's play over the last few weeks ad this defense making opponents question their life-path, it's safe to say we're never going to be out of a game this year.

Harper is hurt, Eric King is out for 6 weeks, Bulluck is in more pain and the rib is getting worse, Hill has a hip pointer injury and is generally terrible on defense... at least coaches said 7th round draft pick Cary Williams has been showing improvement on the practice squad because he may get the call this week.

Peter King finally jumps on board the Titans bandwagon, and he gives our guys the first 4 paragraphs of this week's MMQB column:

Maybe if I keep picking against them, it'd be a lock. "Make sure u pick jets next week!'' was the text message from Tennessee defensive coordinator Jim Schwartz an hour after the Titans came back to beat the Jags convincingly on the road, 24-14. No can do, coach.

Paul Kuharsky and I had the same thought after Brandon Jones' odd celebration: did he just reference that off season arrest for gun possession at Nashville International Airport?  If you're going to get a flag, maybe he should get with Crazy Legs and come up with some better celebrations.

ESPN The Magazine writer Ishita Singh digs up some hilarious Fun Facts on Kerry Collins, including a hilarious Onion Headline:

What a career for Kerry Collins. First he overcomes alcoholism, then racism and now his own incompetence.

Here's a good sign your team is having an epic year:

And how about this for sheer conference dominance: If the Titans beat the New York Jets next Sunday in Nashville, they'd have a four-game lead in the so-called battle for homefield advantage through the playoffs with five games left.