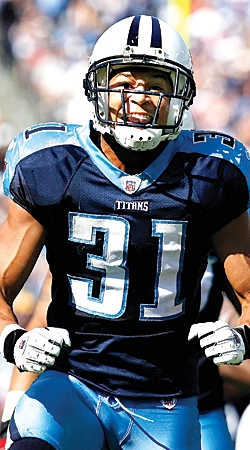 Where did Cortland Finnegan get that feisty heart of warrior that drives WRs crazy and earns the admiration of Hall of Famers like Dan Dierdorf?  Growing up with a mother who is an American hero is a good place to start looking.

ESPN scribe Rick Paulas worries that Crazy Legs is about to hit the rookie wall because he's on track to  get 57 more touches than he ever did in a college year.  I'm more worried about Crazy Legs hitting a wall because he's so fast that solid objects must get blurry when he's at full speed, and it can't be easy to stop when you're going Ludicrous Speed into the end zone!

Brandon Jones is still haunted by that game-breaking drop on 4th down against the Colts last year... just typing that brought back terrible flashbacks.  The guy has been as good as he's ever been the past few weeks, to the extent that I'd love to see Jones start over McCareins soon.

Nashville's own Clay Travis tells us that Kerry Collins has written a country song titled "It's Hard Not to Be Happy When I'm Looking at You".  You see now why I buried this in the middle, rather than pimp it up top.

DK: They're one of the teams -- there may be more -- but they are one of the teams that can get pressure with a four-man rush. They don't have to blitz to get pressure. You have to account for their front four every down and even though people talk about one or two guys, they rotate eight guys through there and their front four, their front eight guys they rotate through there play very hard. A team that can get pressure with the front four and then they have the type of corners who have the confidence in their ability to sit on routes, so they don't give you anything. Just because they load the box with an extra guy, a lot of teams that do that invite you to throw outside breaking routes one-on-one against their corners. Their corners, they sit on routes. They're not afraid to gamble and try to steal. They're not going to just let you lob it out there on an out.

2 more quick notes from Kuarsky: Titans center Kevin Mawae will be on PTI today, and here's video of the ever-weepy Trent Dilfer comparing these Titans to his Super Bowl champion Ravens.  I didn't watch it because I never trust Dilfer when he says it's just an inflammation in his tear glands...

Cosmopolitan commenter UrbanDad passes along this odd youtube video, "The Ballad of Kerry Collins". I probably wouldn't link it if it didn't feature one of my favorite song writers of this or any other generation: Ryan Adams.

Dissecting the current status of the QBs from the 2006 draft class... this is liable to become a postmortem pretty soon if these cats don't turn it around soon.