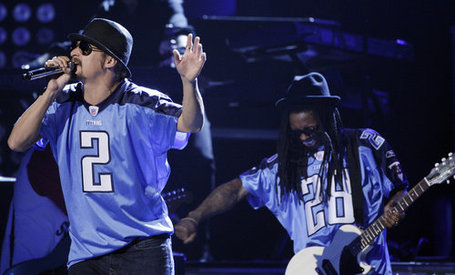 It's not slight to VY, but I have to agree with Terry McCormick that Collins is looking like the perfect match for what Mike Heimerdinger wants in a quarterback.

One of the dumber questions I've ever seen asked: Has The NFL Figured Out Chris Johnson?  Let me answer that one for you: hells + no.  The awesomeness of Crazy Legs is like a riddle wrapped in a mystery inside an enigma.

Not sure how this slipped through the cracks, but the USA Today had a must read on Jeff Fisher last week, and the coaching career that almost never was:

Fisher initially said no to a coaching career. After the Bears' 1985 Super Bowl championship season, he turned down a chance to be an assistant for Buddy Ryan, when the Bears' defensive coordinator got the head coaching job in Philadelphia...

What was Fisher going to do instead of remaining part of pro football? Enter the exciting world of selling software.

He had hooked on with a California company and was going to head its Midwest division, even though he admits he's computer illiterate, and that to some extent he faked his way through early sales presentations.

Jevon Kearse went to school with Oak Hill Elementary student Connor Tharpe to promote the NFL's Play 60 program.  When the two got to the school, Connor's classmates were all wearing the Freak's jersey with a piece of tape separating the 9 and 0!  With kids like that running around, I am no longer worried about the future of this state.

Earlier in the year we visited Cold Hard Football Facts' Bendability index.  This handy metric measures team-wide defensive efficiency to see which teams force opponents to go the most yards for each point.  We've lead all year, but now it's getting deliciously out of hand:

The Titans stand out from the pack for a couple of reasons. Not only are they tops in scoring defense, surrendering a meager 12.9 PPG, but they make their opponents work harder than any others in football for those meager scraps on the scoreboard.

The most impressive aspect of their game, though, is the massive best gap of 3.96 Yards Per Point Allowed between No. 1 Tennessee and the No. 2 Carolina. It's the same margin between No. 3 Carolina and No. 18 Washington.

Craig Hentrich won this week's AFC Special Teams Player of the Week Award.  Am I the only one who misses the fake punts and random passes Craigers was getting to break-out a few years ago?  I never thought I'd appreciate a punter as much as I do this cat.

In news that almost made my head explode from shock, citing the struggling economy, the NFL is actually LOWERING PLAYOFF TICKET PRICES by 10%.  That's pretty awesome for a league that could easily double it's prices and still sell-out playoff games.  Also, the Titans started sending out invoices for playoff tickets to season ticket holders this week!

* Big Tip of the Hat to crucial commenter gramsey712 for passing along this pic from last night's CMAs.