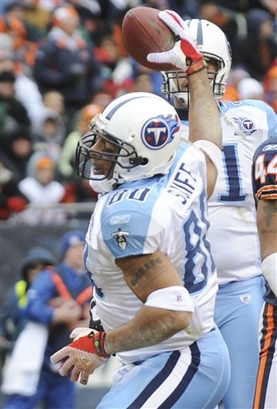 Did anyone else notice that, while playing with cracked ribs, Keith Bulluck racked up 12 tackles last Sunday?  That's unreal!

Jim Wyatt gives us another installment of 5 Things We Know About the Titans.  Not included: Crazy Legs once finished a close second in the 100m sprint to Olympic bronze medalist Walter Dix.

Superstud tightend Bo Scaife, who has been our most consistent receiver this year, could be an unrestricted free agent at the end of the year.

Man it's awesome, so so very awesome, to see Brian Billick spending gameday in a crummy sports bar doing a radio feed on how the 8-0 Titans could definitely run the table this year. Little known fact: every-time Billick cries an angel gets its wings.

Paul Kuharsky takes a look at the ESPN Power Rankings, and I think he's trying to say something:

• Tennessee's nine wins have come over teams with an average rank of 20.1.

• Indianapolis' five wins have come over teams with an average rank of 13.2, while its average loss has come at the hands of teams that averaged 14.5.

• Jacksonville's four wins have come over teams with an average rank of 21.5, while its average loss has come at the hands of teams that averaged 15.2.

• Houston's three wins have come over teams with an average rank of 25.6, while its average loss has come at the hands of teams that averaged 11.2.

I wonder what the median ranking is of the teams we've lost to so far?  Go ahead and calculate that one mister man, I'll wait...

I think The Elias Sports is trying to tell us not to expect too many more wins with the kind of production we got against the Bears:

PFW says that while other teams may try to defend the Titans like Chicago did, they will most likely get the same results.

The Titans have slid to 3rd in Football Outsiders' Defensive DVOA rankings, but we're also sporting a 99.8% chance at making the playoffs.

In personal news, I got my favorite Titans hat signed by Jeff Fisher last night.  There is no truth to the rumor that I made Fish pinky swear to sign Haynesworth, but don't think I didn't try!