Tennessee Titans Morning Links: You Should Listen To Your Friend Billy Zane Edition

Share All sharing options for: Tennessee Titans Morning Links: You Should Listen To Your Friend Billy Zane Edition 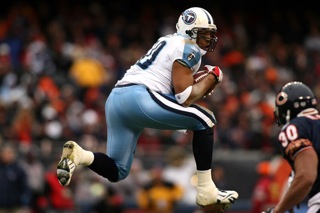 There's only one thing that is certain when a team reaches 9-0: you're going to be in everyone's crosshairs from here on out.  Luckily strength coach Steve Waterson installed drills designed by Tom Berenger and Bill Zane to improve serpentine running and camouflaging in training camp.

Paul Kuharsky dives into the numbers from the Titans win over the bears and finds that while Collins sprayed it all over the field, it was his short passes that brought home the bacon.

PFW takes a moment to point out that Bo Scaife is without a doubt one of the best receiving tight ends  in the league.  Other people who know this: any Titans QB who has been chased around in the backfield while desperately trying to find an open man.

It seems like it's been forever since Kerry stepped in and took the reigns of these Titans against the Jaguars in week 1, and he still hasn't looked back.  In fact, he isn't looking too far forward either.  It's lines like this that make you love the guy:

Collins, who took the Giants to Super Bowl XXXV, isn't ready to call the Titans the best team he's ever played for. He knows a lot can happen in a few months.

"We're getting there,'' Collins said. "So much of what makes a good season is what happens in the second half of the year."

Sure, the Bears pulled the 4 linebacker scheme the Colts used on us, but what did they do differently actually shut down our run game?  Fisher explains:

... the Bears did some things no team had done to the Titans in 2008, Fisher said: "They had backers in the gaps, penetrating the gaps, and safeties on the edges with backers blitzing off the edge."

Super-commenter Rustmeister weighs in on last weeks win and a thought that I'm sure terrifies networks: what if the Titans and Cardinals were to meet in the Super Bowl?