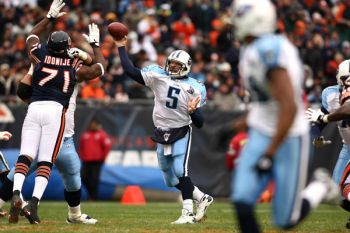 That game puts my mind at ease a little bit.  I was worried about what would happen if an opposing team was able to completely take away the Titans running attack.  The Bears held the Titans to 20 net yards on the ground.  If you would have told me that number Saturday night I would have said there was no way the Titans would win that game.  Kerry Collins bounced back from his worst game of the season last week against the Packers to have his best game of the season going 30 of 41 for 289 yards and 2 touchdowns.  He proved yesterday that he can do more than manage the game when he is called to do so.

The start of the game felt a little like bizzaro world yesterday.  The offense usually comes out and marches right down the field because Dinger is so good at scripting plays to start the game.  Yesterday they went 3 and out on the first drive.  The Titans defense usually comes out strong, but Rex Grossman marched the Bears right down the field for 7 points.

The offense didn't really get going until the third possession.  That drive included 2 catches by Alge Crumpler, one of which was a 20 yard reception of 2nd and long.  I think we are going to see some big things from Alge down the stretch.  That drive ended with the Ahmard Hall fumble on the goal line.  (Sarge didn't have his best game of the season yesterday, but he is still loved here at MCM.)  That play would have been an easy TD if not for the fumble, and I understand they were going for the element of surprise there, but I still would have liked to have seen that play go to The Touchdown Machine, LenDale White.

The Titans defense came up huge following the fumble by not allowing the Bears to convert a first down.   Chris Carr, who has been an unsung hero in this 9-0 start, returned the ensuing punt 29 yards to give the Titans great field position at the Chicago 25.  Four plays later Bo Scaife caught a TD pass from Collins to put the Titans on the board and tie the game.

That was it for the scoring in the first half.  The only other play of significance was the David Stewart personal foul call that knocked the Titans out of field goal range on the next drive.  The Titans did get lined up for a 49-yard field goal at the end of the half, but Rob Bironas came up well short kicking into the Chicago wind.

The second half opened like the first half usually opens for the Titans.  After the defense forced the Bears to go 3 and out, Collins marched the offense right down the field for the go ahead touchdown.  Collins had completions of 11 (Brandon Jones who should be #1 on the depth chart now), 16 (Justin Gage who suddenly remembered he is supposed to catch it when it is thrown to him), 10 (Scaife), 5 (Scaife) and the 12 yard TD strike on a slant (Gage).  Adam at WCG mentions that the slant call there was probably a result of something the Titans saw when watching film of the Bears.

There wasn't much action after that until the Titans put together a 11 play 52 yard drive that ended with a 2 yard TD plunge from Smash.  The ensuing kickoff was returned 41 yards by Devin Hester.  The Titans kicked to Hester all day and did a really good job of not letting him hurt them.

The Bears would end up attempting a field goal coming off of that kickoff return by Hester.  Jason Jones blocked the kick which prompted an Elaine Benes type celebration from Jeff Fisher (Full disclosure: I stole that from a guy on the radio).

Grossman would get a 1 yard TD run that came from the Titans lovely prevent defense, but that would be the end of it.  The Titans emerged from snowy Chicago 9-0.

At 7-0 we looked at the Packers/Bears/Jaguars stretch and said we needed to win at least 2 of 3.  Done.  Now we look at Jaguars/Jets/Lions and need 2 out of 3.  That seems even more doable.  Here's to hoping we win all 3.