Tennessee Titans Morning Links: The Freak Knows What We Are Edition

Share All sharing options for: Tennessee Titans Morning Links: The Freak Knows What We Are Edition 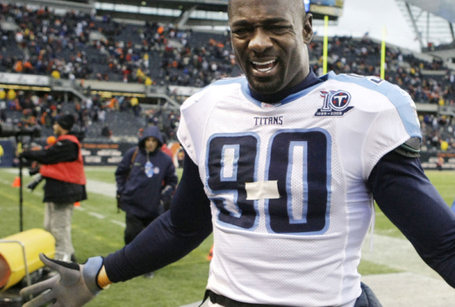 So when exactly does Kerry move from 'game manager' to game 'winner'?
Kerry sliced those Bears so ruthlessly I expect him to get a special commendation from Stephen Colbert anytime now...

I'd like to officially welcome Brandon Jones to the season.

Don Banks nails why yesterday's win was a revelation and a frightening sign for everyone we face from here on out:

If they're paying attention, the other 31 NFL teams realize that 9-0 and "Uh-oh'' are now the operative words when it comes to describing the Tennessee Titans.
Because now what? How do you stop a Titans team that just proved it doesn't have to run the ball to win a ballgame? What should be made of a Tennessee team that can go nowhere on the ground, and still win a big game on the road with its passing game? That's the sobering dilemma that the rest of the league now faces in the wake of Tennessee's 21-14 win over the Chicago Bears on Sunday at Soldier Field.

We can add Matt Ufford of WIth Leather and Kissing Suzy Kolber to the Ahmard Hall man-crush list... too bad my boy struggled so mightily Sunday. (Big Hat tip to UrbanDad for passing this link along... sorry I left that our earlier.)

Peter King still absurdly has the non-perfect Giants ahead of us in his clown rankings, but at least he did make one notable observation about the hottest team in football right now:

2. I think Cortland Finnegan is as chippy a player on defense as Hines Ward is on offense. I said chippy, not dirty. They're not dirty players. They're edgy, physical players