Share All sharing options for: Titans 13 Ravens 10: The Recap 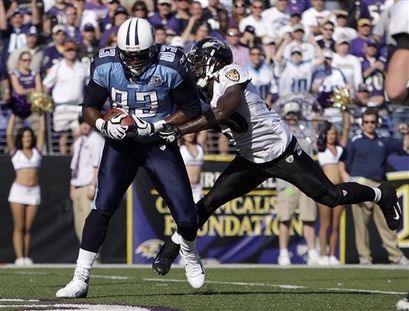 First off, I need to apologize again to Alge for what I said about him in the game thread about looking like the high school kid that didn't belong on the football team.  He came up big when it mattered the most yesterday.

Also, I love the fact that Kerry Collins faked Ray Lewis out of his jock on the game winning touchdown pass.

Let's talk about Collins for a minute.  There is a lot of talk on this site about Collins's performance yesterday.  Collins was bad early, but he hung in there, like a true professional, and led the team down the field on the game winning touchdown drive.  I really hope Vince Young was paying attention to that because that attitude is what it takes to be a successful NFL quarterback.  VY will have to show the coaching staff that he is mentally capable of doing that before we see him on the field again.

Bottom line in the whole Collins/VY debate, Collins is our quarterback for now.  Is he a long term solution, absolutely not, but the best thing for this team right now is to have him under center.  VY determines where it goes from here.

As for the game yesterday, it was pretty much what I expected it would be.  The Titans started fast on offense, like they always do under Dinger, but their first drive was ended with Collins's first interception.  To be fair, that one wasn't really his fault because it was tipped at the line.

The Ravens drive that resulted from that pick was very frustrating because the Titans had it stopped until the personal foul call on Chris Hope that shouldn't have been called at all.  Sidebar: Someone correct me if I am wrong, but Derrick Mason is a really big punk now, and he wasn't like that when he was with the Titans.  I guess going to the Ravens just automatically does that to a person.  So instead of the Titans getting the ball back, the drive continued for the Ravens and ended with a 38-yard field goal from Matt Stover.

Chris Carr, who got good all of a sudden, returned the ensuing kickoff 49 yards to set up great field position for the Titans.  Of course that was all for naught after Collins threw his second pick of the day 3 plays later.  That picks was terrible.  I have no idea what he was looking at there.

After trading punts, the Titans got their first turnover of the day when Michael Griffin picked off Joe Flacco at the Baltimore 31.  A Ravens' personal foul on the interception gave the Titans the ball at the 17, the Titans would run 3 plays, get no yards, and settle for a 35-yard Rob Bironas field goal.

After trading punts again, the Titans decided to give up some big plays to the Baltimore offense right before the half.  Luckily they didn't amount to anything because, as Rexx metioned over at Baltimore Beatdown, the Ravens did a poor job of clock management, decided to take a TO instead of the 10 second runoff after a false start, and then sent Stover to attempt a field goal that he missed.

I was extremely pleased to head into the half with the score tied after how poorly the Titans played in the first half.

The second half did not open very well for the Titans.  The Ravens put together a good drive on the Titans' defense that was capped off by a 1-yard touchdown run by LeRon McClain.

Of course, that drive will beremembered for the words and shove between Keith Bulluck and Cortland Finnegan.  We all love Finnegan here, but I think we would all agree that he lost his head during that possession.  The arguing spilled over to the sideline where the two had to be separated by defensive coordinator Jim Schwartz.  It doesn't appear to be anything more than something that blew up in the heat of battle.  Both players said after the game that they had put it behind them, and I don't see it causing any problems down the road.

Punts were traded once again before the Titans offense, a.k.a. Brandon Jones, came to life.  I have been very critical of Jones in the past, but the Titans don't win that game yesterday without him.  He had 3 catches for 54 yards on the drive that ended with a field goal to make it 10-6.

The Titans defense gave up some yards on the next drive but were able to force the Ravens to punt.  This defense may give up yards but they are able to keep teams out of the end zone.  That is all that really matters.

The next drive was the one where Ray Ray lost his jock.  Gotta love it.  Ravens' fans, with the exception of Rexx, are complaining about the roughing the passer call on Terrell Suggs.  Was it a bad call?  Yes, but there were some bad calls against the Titans in the game as well.  Good teams take advantage of those breaks, and that is what the Titans did yesterday.  The game winning touchdown play was beautiful because The Murder jumped the out on Collins's pump fake and left Alge open in the end zone.  Ball game.  Thanks for playing.

Win number 5 wasn't pretty, but it was a win and that is all that really matters.  The Titans now go into the bye week and will have a chance to rest and get healthy coming off a very physical game. 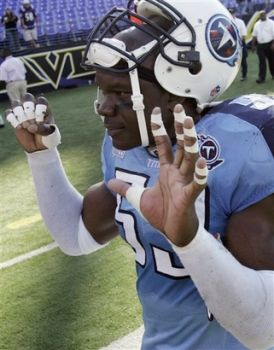