Another week, another slobber-knocking football game.  This one should be a low-scoring affair.  The "experts" are pretty split on this one: 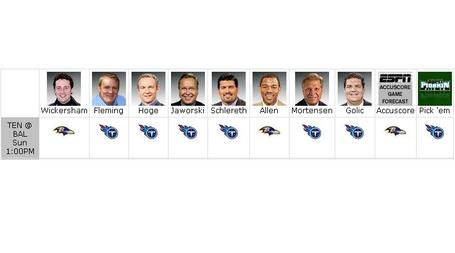 This one is pretty simple in my mind.  The team that wins the turnover battle will win the game.  The good news for the Titans is that they have been very good in turnover ratio this season leading the league at +6.

The Titans' rushing attack against the Ravens' defense will be a lot like last week.  Chris Johnson should find some success because of his speed, but LenDale White will probably find the yards hard to come by.

The Ravens' defense is very good against the pass as well.   Kerry Collins's main charge will be to take care of the ball.  They will need him to hit some throws down the field to open things up, but the defense is going to win game.

The passing attack will be at a bit of a disadvantage because Justin Gage is probably going to miss the game, but hopefully that means that Lavelle Hawkins will see his first significant time.

Defensively the game plan is simple, stop the run and pressur Joe Flacco.  Flacco has looked pretty good so far this season, but he is still a rookie.  Jim Schwartz is going to throw a lot of different looks at Flacco to try and bait him in to making a bad decision that results in a turnover.  The Titans typically don't blitz much, but I bet there will be a couple of extra blitzes called tomorrow.

The Ravens have some talent in their backfield with Willis McGahee, rookie Ray Rice, and Le'Ron McClain.  The key for the Titans will be to limit the gains of these guys on first and second down to force the Ravens into obvious passing situations.

This will be a physical football game that won't be easy, but the Titans will be the better team on the field tomorrow.  As long as they take care of the football they will emerge 5-0.