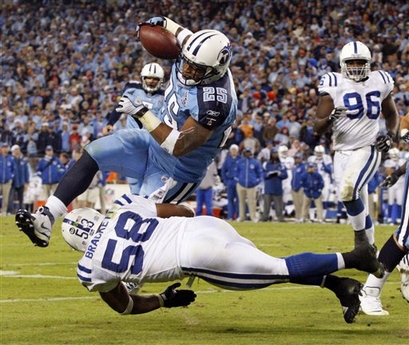 There are very few things that make me happier than watching the Titans beat Peyton Manning.  I have hated Manning for years, and seeing that sad look on his goofy face brings me so much joy.

Chris Carr opened the game with a bang when he returned the opening kickoff 42 yards.  I was very critical of Carr early this season, but he has turned out to be a solid return man for this team.  He is going to take a kickoff to the house before this season is over.

The Titans opened with a very efficient first drive as they always do under Dinger.  The only bad thing about the drive was that the Titans had to settle for a field goal after a 3 yard completion to Bo Scaife on 3rd and 8.  It is frustrating to see a throw to a guy that isn't going to pick up the necessary yardage on 3rd down, but it is possible that all of the other receivers were covered, and Kerry Collins dumped it to Scaife to avoid taking a sack or throwing into traffic.

The Titans defense, playing without Kyle Vanden Bosch, had a good opening series.  It was tough watching Peyton have all day to throw last night, but Schwartz stuck with his gameplan and didn't blitz hardly at all.  The "Bend but Don't Break" defense worked again last night.  I applaud Schwartz for not over-reacting and sending a bunch of people.

The Titans did nothing on their next possession, and bad punt from Craig Hentrich gave the Colts really good field position.  Peyton hit a big pass to Dallas Clark, who seemed to be running free in the middle of the field all night long, and then another 10 yard pass to Clark for a touchdown.

The Titans next drive ended with a field goal as well.  You really saw the Titans philosophy shift on this drive.  They had pretty much decided they were going to attempt to throw the Colts out of their 9 man front.  The Titans proved last night that they can win a game when the other team takes the run away from them.  Some may call the Titans offense anemic, but it is putting up more points per game than the "explosive" Colts offense.  The excuses are really piling up over there.

But I digress.  That was it for the scoring in the first half.  Rob Bironas missed his first field goal of the season after Chris Hope's first interception of Peyton.  Maybe Bironas missed because they didn't shoot off the cannon before he kicked the field goal.

The Colts marched right down the field for a touchdown to open the second half.  That put the Titans behind 14-6, and started Tony Kornheiser's monologue on how that was it for the Titans.  They weren't built to come from behind with Collins at quarterback and blah, blah, blah.  It was enjoyable to watch him flip as the game went on.

Collins shut Kornheiser up by taking the Titans 80 yards on 17 plays.  Only 7 of those plays were runs, and 3 of those 7 runs came from inside the 5.  The Titans then went for 2, and Dinger made a great play call with a play fake to Smash where Ahmard Hall slipped out of the Titans backfield and was wide open in the end zone.

The next Colts drive was what won the game for the Titans.  The Colts decided to go for it on 4th and 1 from the Indy 49.  Not only did they not get it, their play was absolutely blown up by the Titans.  Dominic Rhodes was stopped by Stephen Tulloch for a 1 yard loss.

You could feel the momentum build even more with that stop.  The Titans were able to take the lead on one big throw from Collins to Alge Crumpler and a 48 yard Bironas field goal.  That gave the Titans the lead back at 17-14.

The Colts didn't learn from their first mistake and decided to go for it on 4th down again.  Nick Harper jumped the route on a pass intended for the washed up Marvin Harrison and knocked the ball away.

The Titans anemic offense took the ball 66 yards for a touchdown to push the score to 24-14, and that was your ballgame folks.  It wasn't the end of the scoring though because Peyton gave the ball to the Titans again with another interception.  Chris Johnson took the first play of that drive for a 16 yard touchdown run, and there was much rejoicing in Nashville.

The Colts added another TD in junk time to make the game not look so lopsided, but if you watched the game you saw the Colts hang around for three quarters but get exposed in the 4th quarter.

7-0 is a fantastic start, but there is still a lot of work to be done this season.  The 4 game division lead is awesome, but the race is not over.  The Titans will actually have to play some good teams the next 3 weeks.  We would love to win all 3, but going 2-1 in that stretch will keep the Titans in the driver's seat not only in the divison, but also for home field advantage in the playoffs.