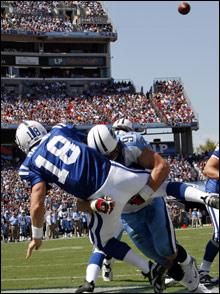 The Colts are giving up over 150 yards per game on the ground.  What do you think this Jeff Fisher team is going to do tonight?  If you guessed run the ball 30+ times then you are correct.  This is going to be another of those games that Kerry Collins only puts the ball in the air 15-20 times......unless......the Titans turn the ball over a few times and fall behind.

I really think that is the only way the Titans lose this game.  This Colts defense is small, fast and built to play from ahead.  They are excellent at getting after the quarterback when they have nothing to worry about but the pass.  The Titans would be in some trouble if they got in that situation.

This is going to be the game that wins Chris Johnson the offensive rookie of the year.  He is going to have a huge game against this defense.  I think we will see him a little more involved in the passing game as well.  They haven't thrown many screens to him this year, but they will probably have some opportunities to do that tonight against the Colts defense.

Look for LenDale White to have his typical game tonight.  I think he gets 15-18 carries and averages right around 4 yards per carry.  Last week Ryan Grant had 31 carries for 105 yards against the Colts.  His 3.4 yards per carry doesn't look great, but it was effective in moving the chains and keeping Peyton Manning off the field.  That will be Smash's job tonight.

The biggest question mark for the defense tonight is the health of Kyle Vanden Bosch.  The Titans won't blitz Peyton much, so they need The Boom King in there to get that pressure.  The play of the front 4 will go a long way in determining the outcome of this game.  The Colts have had some problems on the offensive line this season, and the Titans should be able to take advantage of that.

Again, the Titans are the better team in this game, but I don't think it will be a blow out.  The Colts still have a lot of offensive weapons, the main one being Peyton Manning.  It is really hard to ever count a team out as long as he is on the field.  I predicted a win in this game at the beginning of the season and again on Saturday.  I don't intend on going against that now.  Titans 20-14.

Be sure and be here tonight for the game thread if you aren't going to the game.  I will have the open thread up at 5 central so there is plenty of time for discussion before the game.