Share All sharing options for: Titans 34 Chiefs 10 Recap: The Bongo Beats On 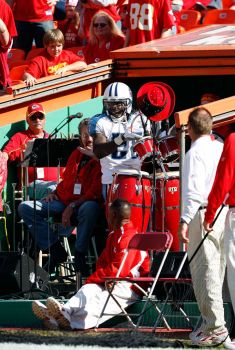 As I said yesterday in the game thread, I feel bad for the fans of the Kansas City Chiefs.  They seem to be a likeable bunch of people and have some of the classiest bloggers on SB Nation, but their football team is really, really bad.  A lot is still being made of the record of the Titans' opponents, but as I have said a million times this season, you can only play who the schedule makers put in front of you.  Yesterday the schedule makers put the Chiefs in front of the Titans, and the Titans dominated them.

332 yards rushing.  8.3 yards per carry.  Let those numbers sink in for a moment.  I don't care who you are playing, that is an impressive number.  The Titans offensive line was dominant just as it has been all season long.  It was good to see the Titans get back to the balance of carries between Bongo (18) and The Round Mound (17).  They are going to need both of those guys to be involved to continue to win football games.  Watching TRM rip off an 80-yard TD run was awesome.

We have been talking about the lack of a passing game here, but who needs a passing game when you are getting 8.3 yards per pop on the ground?  The Titans proved against the Ravens they can make some plays to come from behind in the passing game.  I am not worried about that at all.  The best thing about the passing game yesterday was Bo Scaife and Alge Crumpler making big plays.  Crumpler is looking better and better each week, and he is going to be a huge part of this offense down the stretch.  Scaife just keeps making plays.

The Titans defense was dominant again allowing the Chiefs only 58 yards on the ground.  Again, I know we aren't talking about shutting down the 2007 Patriots here, but they came in and took care of business without half of their starting defensive line.  Kyle Vanden Bosch gave it a go but wasn't able to play much.  Hopefully he will be closer to 100% this week because the Titans will need him against the Colts.  We will keep an eye on KVB and Tony Brown as the week goes along.

There isn't a whole lot to say about this game because of how one-sided it was.  The Titans have gotten through the first 6 games without a let down.  That says a lot when you look at what has gone on around the NFL this season.  The Titans could play .500 football the rest of the season and make the playoffs.  Of course that is not what any of us want to see happen, but it is good to have that safety net for injuries and such.

Now we move forward to the Colts.  One of the reasons I love this blog so much is because we have, for the most part, been able to keep to talk about the Titans and not ripping of the teams they play.  Let's try and keep it that way this week.  We have no reason to be drawn into anything with Colts' fans.  The Titans are 6-0.  The 12-24, or whatever it is, combined records of the opponents doesn't really mean squat.  Colts' fans may not believe now, but they will.