This game scares me a little.  The Titans are easily the better team, but as we have talked about all week long, there are a lot of other things the Titans could be thinking about besides beating the Chiefs.  Here are the 4 letter "expert" picks: 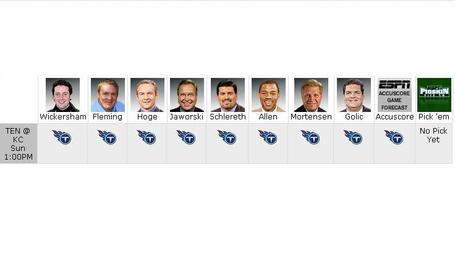 The Chiefs are last in the NFL at rushing defense.  I bet you can guess what that means the Titans will do on offense.  Two weeks ago against the Ravens the running backs had 21 carries.  Chris Johnson had 18 and The Round Mound had 3.  I don't think that will be the case this week.  Don't be surprised to see 35 carries between those 2 in this game with a much more even split. 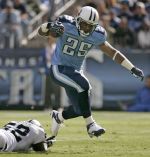 The running game could be even more important if Justin McCareins and Justin Gage are both out for the game.  Neither of them has practiced all week, and both are listed as questionable.  The Titans will obviously have to throw some passes, so I bet we see Bo Scaife and Alge Crumpler get even more looks than normal.

Since Larry Johnson has been suspended from Sunday's game by Herm Edwards, the Chiefs offense will be more limited than normal.  Jamaal Charles will fill in for Johnson.  Charles is a speed back so the Titans defense will need to make sure and be in their gaps.  He is the type of guy that can break some big runs if guys are playing out of position.

The fragile Brodie Croyle gets the start for the Chiefs at quarterback.  Being a Bama fan, I would love to see Brodie do well in the NFL, just not tomorrow.  It is no secret that Croyle isn't exactly Steve McNair so look the Titans will be getting after him all day long.  It looks like Kyle Vanden Bosch has a chance to play, but Tony Brown will probably be out.  Hopefully the offense can put points on the board early and KVB can rotate out a lot in the 2nd half.